Whose Samosa Is It Anyway? The title of this new book itself holds clues to what awaits readers as they cover the expanse from the Indus Valley Civilisation to post-liberalisation India, looking at the myriad influences that have shaped what and how we eat today. As author-journalist Sonal Ved writes in her introduction, “An experiment I highly recommend before we begin the book is to imagine Indian cuisine as a kadai. Into it you add a variety of spices, meats, vegetables and produce found on various terrains—sea shores, mountains, rivers, meadows, plains, hills, deserts and the cities that made India. And now know that this cauldron will be stirred repeatedly, as new visitors and migrants trickle in and create dishes whose flavours only get more potent with time.”

The book, published by Penguin Viking, is particularly relevant at a time when dishes are sought to be appropriated under the homogenised umbrella of “Indian food”, without any recognition of global influences. Ved first realised there were as many hyper-local Indian cuisines as there were states when she was writing her second cookbook, Tiffin—a compilation of 500 recipes from 28 states and eight present-day Union territories.

She believes each region offers its own culinary narrative, through distinct dishes and kitchen staples. There are overlaps, but each is so different it can’t be pigeonholed into “one” Indian cuisine. “What is at present on our plates did not exist, or at least not in this shape and form, even 100 years ago. There has been a slow erosion of indigenous ingredients,” she says. The safed bhutta, for instance, has now given way almost entirely to sweet corn.

Also read: Around the world with grandma’s recipes

“Not only is this topic of appropriation important, I think we need a solid reality check before we claim something as ‘Indian’ or ‘non-Indian’,” she says. Today food history examines the inextricable links with the evolution of religion, sociopolitics, trade, literature, and more. So, Ved asks questions such as: Is the chard Indian because it is growing on a Pune farm? Can one say cinnamon is an Indian spice even though it first grew in Sri Lanka? How did samosa become a potato- and peas-filled snack when it actually started off as a meat-based dish? How did chai become a national sensation when it’s not Indian to begin with? Her research starts with understanding who the early Indians were and what they ate. And as you dive in, it is fascinating to see how differently ingredients and dishes, which might still be staples today, were used earlier.

One of the biggest discoveries for Ved was “Tagore Cuisine”. She found Rabindranath Tagore would insist on unique food at his Khamkheyali Sabha (Assembly of the Whimsical)—an informal club where his friends and he would feast on dishes and discussion. The Tagores used to collect menus during their travels and replicate some at Jorasanko Thakur Bari, their ancestral home. Ved shows that Tagore’s kitchen was cuisine-agnostic, making everything from a British pie and a Turkish kebab to Bengali gravies and food from different parts of India. Born from such experiments, Tagore cuisine featured unusual combinations like jackfruit yogurt “fish” curry (with no fish), jimikand jalebi or dahi malpua. “For me, the kabishambardhana barfi takes the cake (quite literally). It was invented in his kitchen by his niece for his 50th birthday. If you thought cauliflower pizza was bizarre, hear this: This phoolkopir barfi is made of boiled cauliflower florets mixed with sugar and khoya,” she says.

Also read: Why Asma Khan’s biryani is the hottest dish in London

Ayurveda and Buddhist fare, it turns out, did not focus solely on vegetarian food. Mahayana Buddhism didn’t allow any meat but Vajrayana Buddhism did. Ved says the Theravada Buddhist school of thought allowed meat, as long as the monk was certain no animal had been killed for his personal consumption, that he was simply being offered an already-cooked meal. “As far as Ayurveda is concerned, the Charaka Samhitā mentions consumption of meat on several occasions, with notes on which ones are good for the body and which aren’t,” says Ved. “Slowly, as the vegetarian movement gained momentum in the country, religious do’s and don’ts changed. However, the rules of vegetarianism varied by period and location.”

An interesting example of cross-pollination of culinary ideas is sambhar. Ved say there is no trace of a dish matching sambhar’s etymology in southern literature; there is, though, reference to a Tamil dish called pitlai, made of tamarind, pepper and green gram dal. A popular version suggests that sambhar came into being only when the Marathas began ruling in southern India, with the dish named after Sambhaji, Shivaji’s eldest son. “He was fond of a Marathi dish called aamti which has hints of kokum. The story goes that one day, the regular stash of kokum did not reach the Tanjore palace’s kitchen on time,” she says. “Instead of telling Sambhaji that aamti could not be made, the chef improvised by adding a dash of tamarind pulp and thus was born sambhar”. The dish became such a hit in the court kitchen that it was named sambhar after Sambhaji, and spread to other parts of south India from Tanjore.

There’s a fascinating mention of the qahwa houses of Delhi’s Chandni Chowk, which marked the subcontinent’s first brush with the concept of the coffee house. Ved found mentions of qahwa houses in the 18th century writings of Anand Ram Mukhlis, a lexicographer and poet from the later Mughal period. “He said: ‘Qahwa-house is a place where people sit and make merry and drink it (coffee). Only qahwa (coffee) for qahwa-khana (coffee-house) is used in the verses of many poets. It is said that in vilayat (Middle East and Central Asia) there are numerous qahwa-houses, very elegant and graceful. High nobles go and make merry there. Meetings of men of taste, eloquent persons, poets, men like nightingales assemble there twice a day,’” states Ved. She found that in the Asian-Islamic world, qahwa houses were centres of political discourse, cultural exchange and intellectual debate; the practice wasn’t as widespread in the subcontinent though.

Ved believes that food, like fashion, is cyclical. For instance, she found references in many texts to odana—a congee-like dish, made of rice and water, which had a sweet version, a savoury version, one made with pulses—in so many texts. “It kept coming back, as if it was like that avocado salad you see on every single menu these days!” she says. She found it in the Vedas, in Pāka Darpanam, King Nala’s book on Indian cooking, in Vinaya Pitaka, an ancient Buddhist scripture.

Another dish which kept reappearing was the apupa, possibly the ancestor of the malpua. She first found mentions of it in the Rig Veda as barley-flour pancakes, deep-fried in ghee or boiled and eaten with honey. “This helps us understand ways in which barley—the most common grain during the Vedic period—was used. I like to believe that apupas may have changed character, as in later literature we find them to be made out of wheat flour, milk, clarified butter and sugar, with spices such as cardamom, pepper and ginger added to the batter. And finally becoming the malpuas of our time,” says Ved.

‘She is wasting a lot of food’

Sun Oct 24 , 2021
A chef husband is fed up with his wife’s horrible cooking and messy kitchen habits. He consulted Reddit’s “Am I the A******” forum. His wife tends to dirty up the kitchen even when completing a simple task. Moreover, she is a terrible cook who makes inedible food. After she made […] 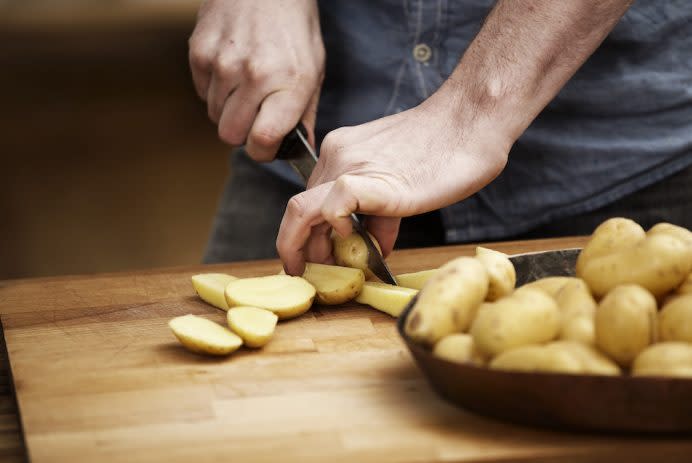