Victorian hospitality’s young blood who are challenging the status quo scooped up accolades at The Age Good Food Guide 2023 Awards ceremony in Melbourne.

Held for the first time in three years, Monday night’s event at The W Hotel marked a return to normality for a pandemic-scarred industry that was ready to celebrate its achievements against the odds.

Aru, an unbuttoned fine-diner where Vietnamese-Australian chef Khanh Nguyen plays with the flavours of his upbringing, won Vittoria Coffee Restaurant of the Year. Combing native Australian ingredients and South-East Asia’s long history of wood-fired cooking, Aru has brought something original to Melbourne since it opened in June 2021.

“Aru is a restaurant we love to introduce to out-of-towners: it weaves Melbourne stories with eloquence and flair,” says chief critic Besha Rodell.

The New Restaurant of the Year gong was awarded to CBD laneway restaurant Serai. Like Aru, Serai champions an immigrant cuisine – this time Filipino – but adds a contemporary twist.

Roslyn Grundy, editor of this year’s Guide, says this new thread of modern Australian cooking is particularly exciting to see.

Get the latest news and updates emailed straight to your inbox.

“It’s another spin of the wheel in the evolution of Australian dining,” she says.

A changing of the guard is taking place in Victorian dining, Grundy believes, with the next generation pushing to the front and bringing with them new ways of doing things.

The Oceania Cruises Chef of the Year gong went to Julian Hills, who owns and operates small Yarraville fine-diner Navi without any outside investment, all while championing more sustainable dining.

Hills rarely serves beef and spends hours turning produce others would throw away into new products, like miso paste or cocktail ingredients for his bar next door, Navi Lounge.

“Hills is an amazing talent, and yet he’s not one of the big show ponies of the industry. He’s just quietly got on with running his restaurant,” says Grundy.

This year’s Regional Restaurant of the Year, Moonah, located outside Torquay, is run by the young Tobin Kent, who dives and forages for ingredients along the Surf Coast, and serves just 12 guests at a time from a freestanding kitchen table. Struggling to find a sommelier last year, he trained himself to do the wine matches.

The Guide shows Victoria’s regional areas have had an explosion of quality restaurants, with 11 regional restaurants awarded two hats, compared to six restaurants in 2019 (the last time hats were awarded). The number of one-hatted restaurants outside the city has nearly doubled.

But the night wasn’t only about young blood. Eighty-seven-year-old Abla Amad won The Vittoria Coffee Legend Award for nurturing Melbourne’s love of Middle Eastern food for 43 years from her Carlton restaurant, Abla’s.

“Things like Ottolenghi’s recipes might have seemed quite novel in the rest of the world, but because we have had people like Abla in our midst for a long time, those flavours are quite familiar,” says Grundy.

More than 300 hospitality luminaries including Karen Martini, Guy Grossi and Brigitte Hafner descended on The W Hotel in Melbourne’s CBD for the ceremony. As well as the return of the awards, this edition of the Guide brings back hats and scores bestowed by the Guide’s reviewers. These were put on hold while the industry recovered from the pandemic.

“People call the Good Food Guide the restaurant bible. I think it really has been missed these past three years,” says Grundy.

For the first time this year, the Guide also awarded hearts to restaurants that may not score a hat but are highly recommended by reviewers.

The Age Good Food Guide 2023 magazine is on sale from today for $9.95 at newsagents and supermarkets and thestore.com.au.

Mon Nov 21 , 2022
Urgent warning issued over popular yet ‘dangerous’ TikTok cooking trend: ‘Never try this at home unless you want it to burn down’ Fire officers have issue warnings over the latest bizarre TikTok cooking trend Hundreds of people across the globe have begun cooking raw steaks in a toaster London Fire […] 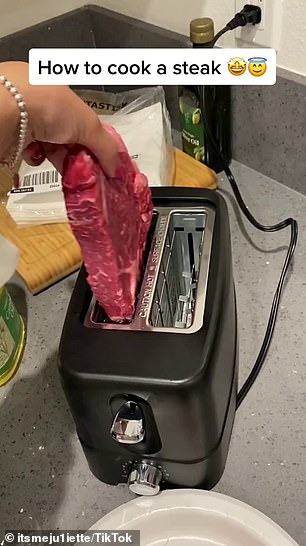