When Kevin Tien was growing up in Southern California, he fondly remembers roaming the streets of LA’s Chinatown. Alongside his grandparents, mom, aunt, and uncle, he would wander in and out of stores, picking up mementos along the way.

“I remember grabbing small snacks, like marinated and grilled quail,” he says. “Or peering into a fountain to look at turtles, then stopping into one of those souvenir gift shops to pick up fireworks that we’d throw on the street to hear them pop.”

So it’s no wonder that the Ga Chien fried chicken, one of the signature dishes at his acclaimed Vietnamese restaurant Moon Rabbit in Washington DC, is inspired by a street food staple.

A similar full circle journey happened for Erik Bruner-Yang, who was born in Taipei and lived in Japan during grade school. When he opened his hybrid restaurant/retail space Maketto in 2015, he took inspiration from the markets he explored throughout childhood.

“I grew up going to those festivals and them being a big part of my life, and Maketto itself is really a modern interpretation of a night market in restaurant form,” he says. “My goal was for it to feel timeless without screaming stereotypical Asian motifs everywhere.”

And despite growing up in Arkansas with no night market in sight, and only vague memories of attending them in Taiwan and Hong Kong as a young boy, Tim Ma has embraced street food concepts, as the founder of Chinese takeout spot Lucky Danger and culinary director of Laoban Dumplings in DC’s Union Market.

“This kind of salty-sweet Asian food lends itself to street markets, as late-night options, or cuisine we commonly see on a skewer,” Ma says. “There’s just such a great satiability factor.”

Besides championing the Asian food scene in DC, all three chefs share a common mission to give back—whether that means participating in events like Red Eye Night Market, raising funds for World Central Kitchen, founding the Power of 10 Initiative, or starting the event series Chefs Stopping AAPI Hate.

“All of us have done fundraisers for the last 10 years of our career,” Bruner-Yang says. “But we’ve really recognized the last two years, specifically, that we have the capability of raising a lot of money and we should spend that energy focusing on things that we really care about.”

How night markets in the States are growing up

Of course, the concept of night markets have existed for centuries all over the world, and vary wildly depending on the country of origin.

“In Cambodia, you go to the market for breakfast soup in the morning and then it turns into something else entirely at night,” Bruner-Yang says. “Then Taiwanese night markets are where you go to see the latest culinary fad, like mochi waffles or something. And then in Japan, their night markets are all about protecting heritage and this is how it’s been for the last 100 years.”

Compared to the broader international community, American night markets are very much in a nascent stage and, the chefs agree, there is still a lot to learn.

“Across the world, are these large central gathering public spaces where anybody can go and hang out and congregate,” Tien says. “And that’s not super prevalent in the United States—where an entire city can go and experience their own culture or other people’s cultures on a daily basis. But I think the U.S. is trending more towards that.”

Indeed, from New York City and LA to Seattle and the Bay Area, night markets that pay tribute to Asian street food and the cultural experience continue to pop up. This past fall, the inaugural Red Eye Night Market debuted in DC, put on by the group No Kings Collective.

“For a long time, each Asian community was kind of insular,” Tien says. “And it was really cool to see Red Eye because it brought everyone together. It was awesome to explore different perspectives and see how they’re highlighting these cuisines in new or traditional ways. And, even better, was seeing everyone outside of these communities really come in and enjoy it.”

What’s also not lost on organizers and participants is the timeliness of these markets coming back into the fold after a tumultuous couple of years. With outside gatherings being a relatively safer option in the pandemic, the time is ideal for these types of reunions.

“[Red Eye] was one of the first, really large outdoor events since the pandemic,” Bruner-Yang says. “A lot of us hadn’t really seen each other in forever and we were all kind of going through this collective trauma of, not just the pandemic, but also AAPI racial issues. And it was kind of the first time everyone was able to get together to just celebrate our own diversity.”

Chefs use their high profiles for good

The past two years have cemented the fact that the restaurant industry and its service workers never hesitate to give back and advocate for change. For his part, Bruner-Yang founded the Power of 10 Initiative in 2020, which leverages community donations to not only keep restaurant workers employed but also feed people in need. To date, the program has served more than 300,000 meals to the community.

Ma and Tien co-founded Chefs Stopping AAPI Hate to ​​raise awareness and funds for AAPI organizations in response to the uptick in anti-Asian hate crimes since March 2020. The organization grew exponentially from one charity dinner in DC last May to events across the country in New York City, San Francisco, and Detroit. Most recently, the group raised money to support World Central Kitchen’s relief efforts on the border of Ukraine.

“When it comes to doing charity and nonprofits, the restaurant industry and chefs are always the first people to say yes,” Tien says. “But this past year, especially with the rise of AAPI crimes and incidents, we personally just wanted to do something immediately. Food has become so glamorized with the rise of, I hate to say it, the celebrity chef. Well, if you have this platform, what are you using it for?”

This platform, they say, comes with a big rolodex of connections—whether to powerful change makers in the industry like José Andrés or wealthy restaurant customers. Instead of using these resources for something “ego-driven,” as they call it, they’ve opted to tap them for a greater good.

“Going off that idea of a ‘celebrity chef,’ I think it’s become pretty obvious that it needs to be more ‘community chef,’” Ma says. “Food becomes a very easy conduit to help. Instead of just talking about it, we can actually break bread over it. Using food has been a really powerful way to not only raise money, but raise awareness and bring attention to important issues.”

The future of dining will be purpose-driven

Ma remembers a recent charity dinner in San Francisco where one diner made an anonymous donation of $25,000 right there at the table. He says that while this is certainly an excessive example, it’s indicative of a trend he’s seen on the rise in the past few years.

“There’s a certain percentage of diners who are into the idea of chasing trends, obsessed with the new,” he says. “But then there is this other subset, which may have gotten exacerbated by the pandemic and we’ve seen it from the events we’ve done, who are a purpose-driven set of consumers, interested in supporting a cause.”

In other recent shifts in the dining landscape, Ma has witnessed how lockdowns forced a giant reset in the way chefs approached their concepts. Restaurants reopened with a much stronger perspective, whether that meant leaning into fine dining like Moon Rabbit, digging deeper into diversity like Maketto, or fully embracing takeout like Lucky Danger. No matter the model, chefs’ visions and authentic stories became of the utmost importance to the public.

“For many years, I had a hard time trying to figure out who I wanted to be as a chef,” Tien confesses. “People would always seem like, ‘Oh you’re an Asian chef, you just do Asian food.’” Of course that wasn’t true, and that generalization spurred Tien to cook food that proved otherwise. “And while the food was good, I felt lost personally.”

“But where I think food is going now, and what I’ve accepted is, embracing your own lens of what food means to you,” he continues. “Like my food is not traditional Vietnamese, it’s very much Kevin Tien, first-generation American, with influences from California and the South. And I think you’ll see a lot more food that’s representative of how people actually grew up. I’m excited to see, with chefs of our generation and the next, what food actually looks like for them.”

Ma agrees. His parents came up in the restaurant industry at a very different time, he says. They were making a living, trying to blend in with American culture, just to get by. The ethos of the middle class American restaurant, a certain sameness, was very much the norm.

“We all started out trying to fit into other people’s boxes and concepts,” Ma says. “But now we’re realizing what we value, what we want to support, and what work feels closest to our hearts.”

Sun May 8 , 2022
click on to enlarge Phuong Bui George Nicholas retains the fireplace heading at Olympia. To describe how authentically Greek Olympia Kebob Dwelling & Taverna is, co-proprietor George Nicholas points to the restaurant’s seating: rows of aged, sawed-in-half picket church pews. It can be not only the reality that they arrived […] 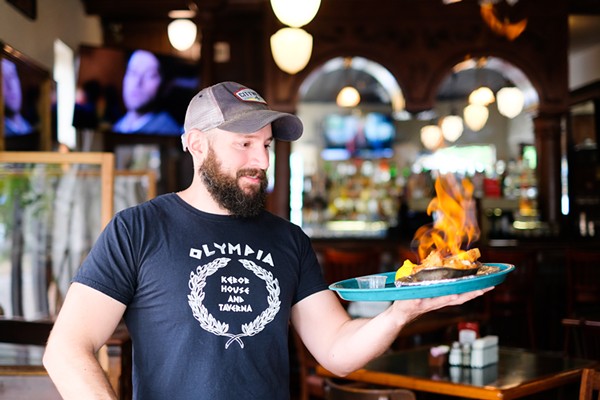