Delhi Chief Minister Arvind Kejriwal on Sunday inaugurated the newly redeveloped Chandni Chowk market and announced that the entire area will be transformed into a tourist hub by allowing street food joints to operate till midnight.

In the redevelopment project, the main Chandni Chowk stretch from the Red Fort to the Fatehpuri Masjid crossing, has been made a “no traffic zone” for motorised vehicles between 9 am and 9 pm.

Addressing the gathering near Fountain Chowk in the main market, Arvind Kejriwal said that after the redevelopment, Chandni Chowk has become more beautiful and people come here to walk till midnight. Earlier, the project was to be inaugurated on April 17 this year but was cancelled due to the second wave of Covid-19.

ALSO READ: All markets should not be targeted due to crowding in some of them, says Delhi trader associations

“We have beautified almost 1.4 km stretch of the Chandni Chowk market and made it extremely beautiful. Traffic on the stretch was improved, dangling wires were made underground, CCTVs were installed under the redevelopment project,” he said.

The stretch has been developed as a pedestrian-friendly corridor and made aesthetically appealing with the help of red granite stone, decorative lights and plants and street furniture. The project was approved in August 2018 while the work on it began in December 2018, PWD officials said.

“It was to be completed in March 2020 but the project got delayed due to the coronavirus pandemic and its deadline was further pushed to December 2020,” they added.

The project got delayed further and was set for inauguration in April this year but the event was cancelled due to a surge in Covid-19 cases in the second wave.

However, this did not go down well with the BJP workers and the traders in the area. They were seen raising slogans against Arvind Kejriwal and also showed black flags to him as a mark of protest. 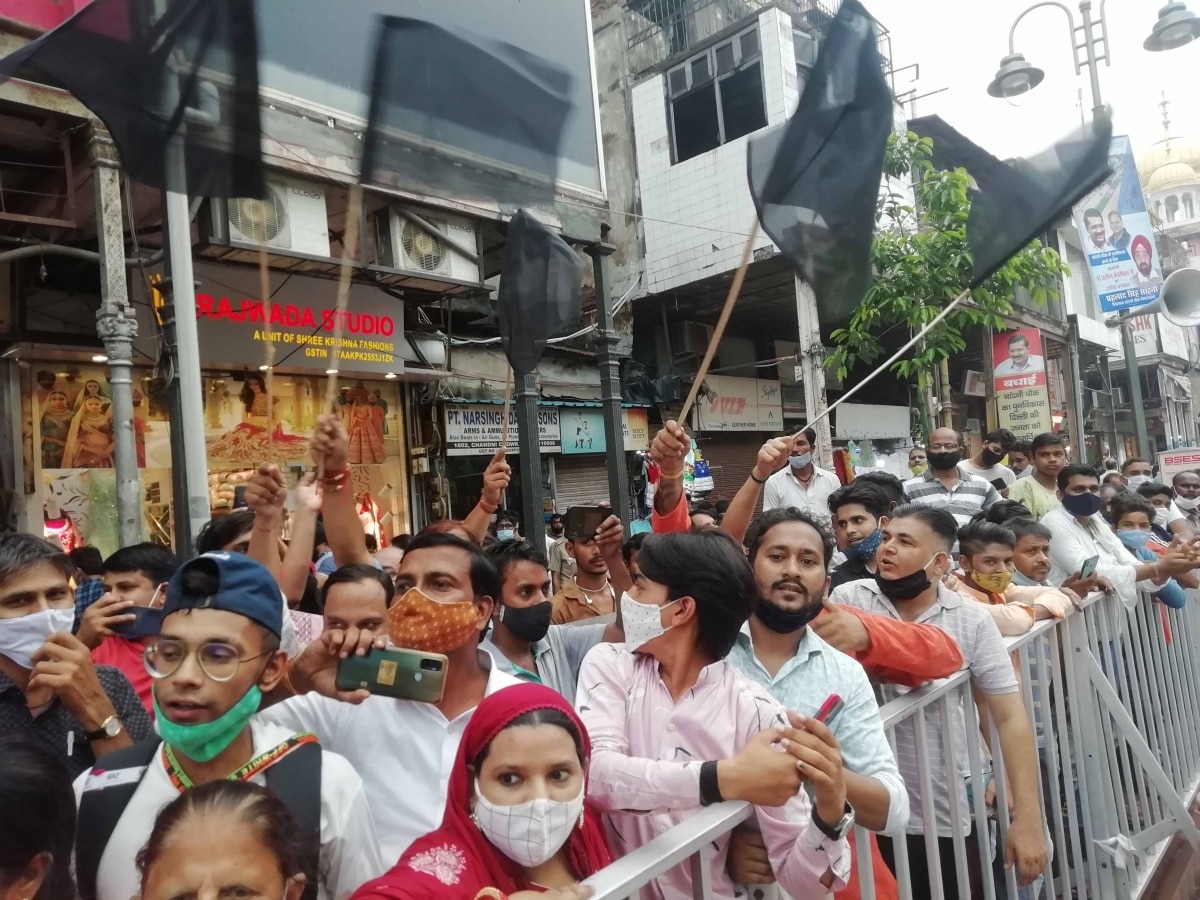 Delhi BJP spokesperson Praveen Shankar Kapoor, who was a part of the protest, said that the protest was not against the redevelopment of Chandi Chowk but against ignoring the traders in this area.

“Chandni Chowk market is Asia’s biggest market where more than 45,000 businessmen work, but in the name of redevelopment, the business has been completely stalled due to the arbitrary attitude of the government,” Kapoor said.

As it has been raining for the last few days, water has reached all the Katra streets through the streets of Chandni Chowk and reached the shops, ruining the goods worth lakhs, he added.

“From 9:00 am to 9:00 pm, no vehicle zone has been imposed in Chandni Chowk. In such a situation, how is the trader supposed to do business? How will his goods come and how will his goods go out,” Kapoor said. Ajay Bhardwaj, a resident of Dariba Kalan Bazar in Chandni Chowk, told India Today TV that he has lived in this area for the past several years and he also has a business.

“The government have made 14 points on this entire 1 kilometer patch. No one could come out from any street. Despite this, a point has been opened for the people living in Ballimaran, from where people living there and traffic can come. But this has not been done in other streets. Why is the government acting on double standards,” Bhardwaj said.

Meanwhile, traders claimed that the Delhi government had also promised the arrangement of parking but nothing has been done yet.

“Goods from Chandi Chowk are imported to hundreds of markets in the country or to weddings but when no vehicle will enter here, goods will not be able to go to other markets nor people are coming to these markets to shop,” said one of the traders.

He further said that if this situation continues, then the traders will be forced to shut down the market.

(With inputs from PTI)