Tony Camilleri is always looking for a new twist, to shake up the ordinary when he opens a new restaurant, and with the arrival of Toro Mexican Street Food in West Hartford, the chef with more than a quarter century of experience is building on the success of Toro Loco in Farmington, but with extra quick service and a menu that’s designed to be eaten on the go.

Toro Mexican Street Food is the third restaurant Camilleri – along with partners Stretch Altenhein (also the owner of Nautilus Tattoo) and James LaFond (also the owner of Grey Matter IT) – has opened locally in the past two years. Toro Loco – which specializes in Mexican tapas with some Spanish influence – opened at 1274 Farmington Ave. in Farmington in January 2020, and the Spanish-style pub Toro Taberna opened at 14 Oakwood Ave. in West Hartford in February 2021. It’s actually the fourth if you count Loco Urban Street Food, a takeout and delivery-only business that has been operating as a ghost kitchen in the West Hartford and Farmington restaurants, and according to Camilleri will eventually be housed at Toro Mexican Street Food.

“Here we took what we started in Farmington and the things that were popular to make a quicker service concept,” he said. The compact restaurant space – most recently occupied by Petals & Paws but vacant for several years – has seats for about two dozen people, and there are picnic tables on a patio in front, but menu items are scaled to be “to go.”

“It’s great for lunch,” Camilleri said. You can have your order in 8-10 minutes.

Camilleri said the menu is unique and although Mexican restaurants have been proliferating lately in the area, he doesn’t see them as being in direct competition.

At Toro Mexican Street Food they make all their own tortillas, using organic, non-GMO corn imported from Mexico and from their house-made masa dough.

And, as with all of Camilleri’s menus, Toro Mexican Street Food is 100% gluten free and even safe for those with celiac disease.

Some of the items on the Toro Mexican Street Food menu that you won’t find elsewhere include the “Perro Elote” ($8.95), a Mexican take on the corn dog that includes grilled chorizo links wrapped in masa, and fried to order. “You get the nice crispy crunch on the outside,” Camilleri said, which offsets the savory chorizo. It’s served on a tortilla, and topped with taco slaw, curtidos (pickleed vegetables), and a gringo sauce (chipotle aioli and garlic-based).

“We do the Oaxaca Street Pizza,” ($8.50) Camilleri said. Served on a large masa tortilla, the toppings can be customized and include chihuahua cheese, black bean mole, slaw, and chipotle crema. It may not sound like “street food,” but in the manner of food that can be consumed while perusing the stalls of a market in Mexico, it’s served on foil, and easily folded in half so it can be eaten while strolling through Blue Back Square or West Hartford Center.

Some of the other menu items highlighted by Camilleri include the Street Corn Esquites ($5.95) on the tapas menu, and the Totopos “Nachos” ($8.50) which features tortilla chips coated and fried with spicy ranchera salsa and topped with cotija, queso fresco, and pepitas. Proteins can be added, and the Totopos Grande ($19.95) is intended to feed a crowd of at least four.

The “Machete” Quesadilla is rolled up tight – “like the blade of a machete,” Camilleri said. The crispy exterior surrounds the savory fillings, and wrapped in foil it can be eaten on the go as well.

“We want to be as food friendly as possible to everyone who comes in. We want to stick to our authentic Mexican roots,” he said, but understands that not every family member may want to eat that type of food. The menu also includes wings (bone-in at six for $8.50 or boneless at half pound for $10.25) with a variety of sauces, plain or spicy fries, burgers on gluten free potato rolls, and pork rinds. Salads are on the menu as well.

“I don’t know if I have a favorite,” Camilleri said of the Toro Mexican Street Food menu. “I like that people have the ability to customize the menu. That’s my favorite part of it.”

There are a ton of vegetarian options, he said, and eliminating the cheese can make virtually anything vegan as well.

There will be a rotating selection of desserts, including pumpkin flan and churros (gluten free, made from yucca and rice flours).

“I’ve been looking at this space for a while,” said Camilleri, who just recently moved to West Hartford and has a daughter who is a freshman at Hall.

The exterior of the building is now as lively and colorful as the food and the interior. A few weeks after opening, Ben Keller arrived to create a “Day of the Dead” and sugar skull-themed mural on what was formerly a grayish-tan painted-brick wall. He even got permission to have the space next door, which will eventually be redeveloped, painted with a “West Hartford” mural to dress it up in the interim.

Artist Ben Keller has painted a mural on the outside of Toro Mexican Street Food at 22 Raymond Rd., as well as a “West Hartford” mural on the vacant building next door at 18 Raymond Rd. Photo credit: Ronni Newton

A liquor license application is in the works, but in the meantime there is Mexican cold brew, agua fresca, and a selection of juices and Mexican sodas.

While the restaurant wasn’t able to open in time to fully take advantage of the patio season, but a few days after late September soft opening, “I already feel like we’re getting good support from the community,” Camilleri said.

He’s also planning to give back to the community, hosting an adoption event for Dog Star Rescue on Sunday, Oct. 17 (11:30 a.m.-1:30 p.m.), and a fundraiser for the Connecticut Breast Health Initiative.

He also plans to have a table set up for the Halloween Stroll on Oct. 23, and an after party that will include family-friendly activities.

Toro Mexican Street Food is also holding a Taco Tuesday Challenge. For $15, diners are challenged to eat 15 tacos in 15 minutes. If you finish, you get your entry fee back, and participants are also entered into a contest. Two winners and one loser will win a feast for 10 on the day of the Super Bowl. The 15 tacos are all beef adobada – chopped beef with an ancho chili mole sauce.

There were two winners on the first day of the contest, Camilleri said.

What’s next for Camilleri? “I’m sure there will be a fourth [local restaurant] at some point. I have no plans to slow down. … It’s finding the right spot and figuring out what concept we want to do.”

Toro Mexican Street Food is located at 22 Raymond Rd., West Hartford, right next to the driveway to Whole Foods. They are open seven days a week, Sunday through Thursday from 11:30 a.m.-9 p.m., and Friday and Saturday from 11:30 a.m.-10 p.m.

By late October, Camilleri said he plans to add a breakfast menu to include tacos, burritos, and a breakfast street pizza.

Like what you see here? Click here to subscribe to We-Ha’s newsletter so you’ll always be in the know about what’s happening in West Hartford! Click the blue button below to become a supporter of We-Ha.com and our efforts to continue producing quality journalism.

Sat Oct 23 , 2021
1. Tatarstan Tatar cuisine is one of the most popular in Russia. Their triangular pies, called echpochmak (literally “three corners”), will win the hearts of any gourmand. Another type of Tatar pie is called elesh, which is similar to echpochmak in taste but is shaped into a circle with “lid” […] 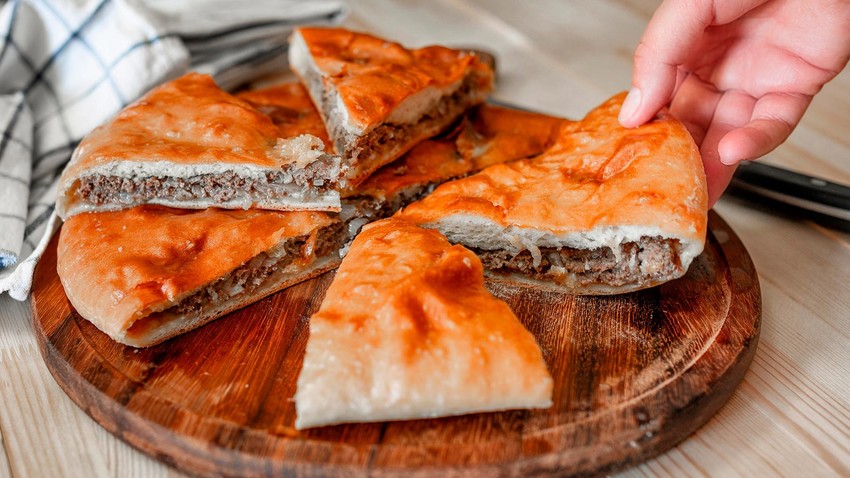