Nemanja Milunovic became a chef because he didn’t like his mother’s cooking.

“I just wanted to be better,” he says. “Growing up, her food was not that good. She was working all the time. She cared, but not really. She was always cooking fast. She didn’t have passion.”

Operating out of an Avondale ghost kitchen, Milunovic is the solo chef behind Kiosk Balkan Street Food. He developed his own passion after taking over his mother’s kitchen in Belgrade, Serbia, where he grew up. She gave him some general guidance and he did get better than his mom (she agrees), mastering moussaka, stuffed cabbage, and goulash with the mushrooms his grandmother foraged. And he moved on to other kitchens, namely Art Smith’s Table Fifty-Two when he first moved to Chicago in 2012, then on the opening team at Nico Osteria, followed by River Roast, and then Prime & Provisions. Along the way he’s staged at touchstones like Alinea and Manresa, and graduated from the French Pastry School. He’d been the head baker at the Little Goat for three months when the pandemic struck, so he left for Las Vegas, where he completed an internship at Amaury Guichon’s Pastry Academy.

What all this continuing education has added up to at Kiosk is a menu of formidable sandwiches on an extraordinary version of somun bread, a catalog of traditional and tweaked spreadable mezze that span the Balkans, and audacious improvements on sacred, canonical dishes.

Take his reinterpretation of the karađorđeva šnicla, a rolled schnitzel created in the mid-50s by Milovan Mića Stojanović, who went on to become the personal chef of strongman Josip Broz Tito. Stojanović, when faced with a request for chicken kiev in a poultry-poor kitchen, subbed a veal fillet, rolled around a generous schmear of the creamy dairy spread known as kajmak, then breaded and deep fried it to a somewhat phallic crisp. Bedecked with tartar sauce and lemon slices, it doesn’t vary much most places, but Milunovic departs from Stojanović by piping in melty mozzarella and provolone with the kajmak core because he can’t abide how the dairy spread’s emulsion breaks in the heat on its own.

Milunovic also unconventionally adds jalapeños to his green pepper-eggplant version of the Macedonian malizdano, which is one of three key Balkan roasted pepper spreads, along with ajvar, to which he also adds roasted eggplant in defiance of what he describes as an endemic Serbian distaste for aubergine. “They think it’s cheap,” he says. “They want 100 percent roasted pepper, but I personally don’t like that.”

Milunovic gilds his surprisingly buoyant pork-stuffed braised cabbage rolls, aka sarma, with horseradish cream instead of sour cream to bite through the richness, a touch almost subverted by a couple of smoked pork ribs on top, a display of cheffy soigné that’s a surprise to take in sitting in a plastic takeout container. He studs his flaky sour cherry hand pie with pistachios instead of ground walnuts because, “I grew up with them in all possible desserts,” he says. “I can’t stand them anymore.”

With just these items Milunovic displays an audacity that puts him among the ranks of local chefs taking Balkan food to new places, like Bojan Milicevic at Lincoln Square’s 016, and Joe Flamm, whose Croatian-inspired dishes are the best things on the menu at Rose Mary in Fulton Market.

But if the only thing that came out of Milunovic’s ghost kitchen was his magnificent bread, he’d be a chef worth seeking out. “All I care every day is that bread needs to be the same,” he says. “I spent so much time developing it, it’s almost like my baby, my third kid.”

Every night Milunovic ferments the high-hydration dough for his pillowy somun, which differs slightly from the more common flatter, focaccia-like lepinje. “It’s very hard to shape because of the water, he says. “It’s almost like a pizza dough,” but these orbs rise like cumulus clouds, which he crowns with a crosshatched, tortoise-shell pattern that gives the eater a confident grip that won’t fail when attacking his superstuffed sandwiches. Those include a serious contender in the ongoing fried chicken sandwich wars; a thick crispy buttermilk-brined breast, topped with Serbian-style cabbage salad, pickles, and urnebes, a chili and goat cheese compound that’s not unlike a spicy southern pimento cheese.

The bread also accommodates a five- or colossal ten-grilled beef cevapcici sandwich, topped with ajvar and kajmak, but future young chefs might look back on his lamb sandwich, a silky mountain of thinly shaved shoulder, glistening in its own rich, paprika-spiked braising liquid, and topped with tzatziki, onions, roasted pepper, and cucumber. He likens it both to Chicago-style Italian beef and Turkish doner, but it ought to be the thing that writes his own Stojanović-level legend.

I’ve been watching Milunovic on Instagram for almost as long as he’s been open (h/t
@chibbqking). It’s abundantly clear he’s bursting with more ambition than can be contained in his tiny ghost kitchen. (Check out his chocolate kajmak pumpkin burek, or this 200-pound elephant). He wants to put his food on plates, rather than in to-go bags. So for that reason I’m pleased to say he’ll be taking over the Kedzie Inn’s spacious kitchen on a date to be announced for Monday Night Foodball, the Reader’s ongoing chef pop-up series. He’s talking about doing a Croatian/Macedonian-style fried fish sandwich with red tomato wine buzara sauce, and a komplet somun, a cheesy, eggy breakfast bread bowl that’s breathtaking under most circumstance—but he’s thinking of raising the stakes with braised short rib. More details to come.

63 Tasty Fall Recipes That Make Weight Loss So Much Easier

Fri Oct 8 , 2021
Be honest—the last thing you want to eat on a chilly fall day is a salad. Sure, in the summertime, salads are refreshing. They are full of all kinds of summer produce and keep us feeling slim and trim throughout the summer months. But as the colder months come around, […] 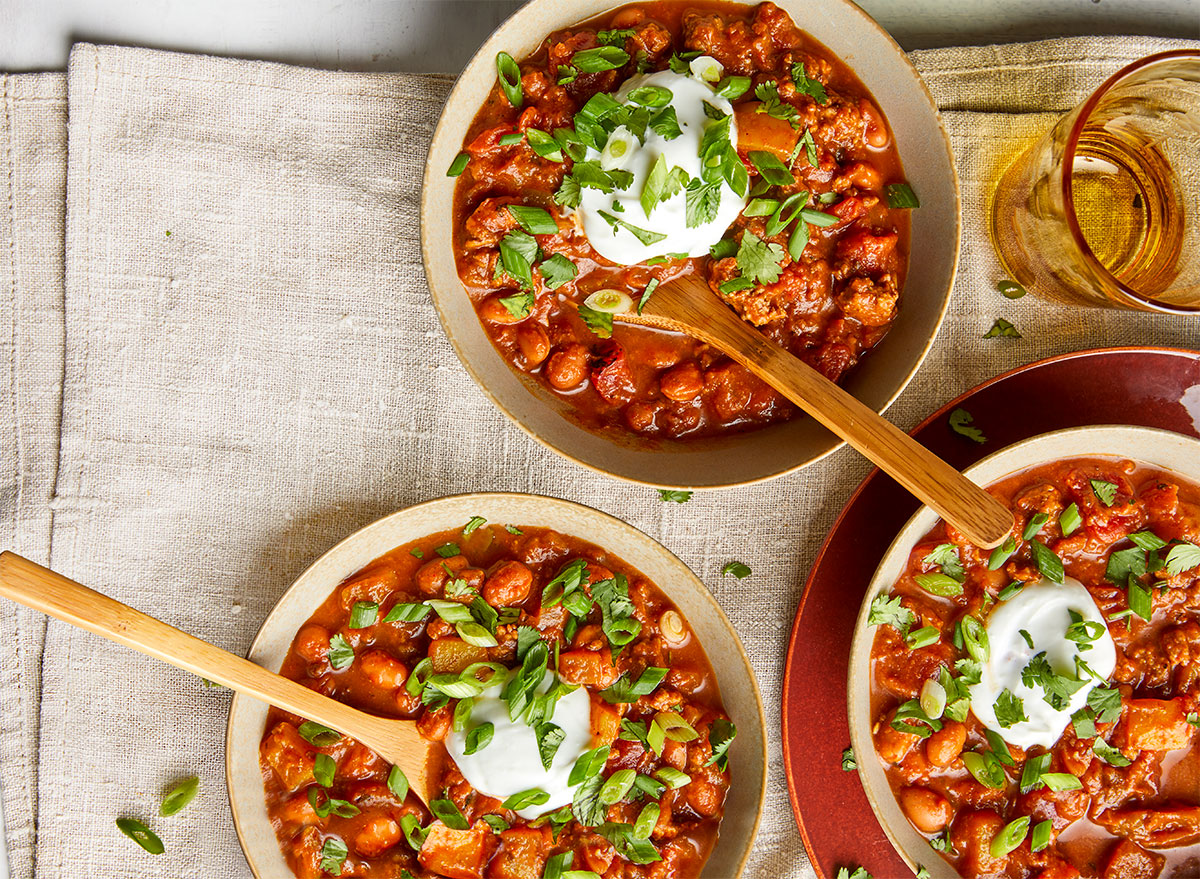