James Beard Award-winning chef Hugo Ortega and multiple James Beard award-semifinalist restaurateur Tracy Vaught are known for the upscale Mexican cuisine they serve at Hugo’s, Xochi and Caracol. However, the taquitos dorados at Xochi and Ortega’s cookbook, Hugo Ortega’s Street Food of Mexico, that show the diverse fare served by Mexico’s roadside stalls are an inspiration for many of the dishes at the couple’s restaurants. Now, they have opened a restaurant dedicated to Mexico’s street food: URBE. Located at 1101 Uptown Park, in the same shopping center as Etoile Cuisine Et Bar and Giant Leap Coffee, the eatery — the name of which is Spanish for “city” — offers a light, relaxing atmosphere, with counter service and a more casual menu for breakfast, lunch, weekend brunch and sit-down service for dinner, which was just added.

Chilaquiles are a staple found at many spots that serve Mexican breakfast. Typically, it is a simple dish of quartered and fried corn tortillas (chips, if made lazily) topped with refried beans, eggs, cheese and salsa that is gently cooked until the tortillas begin to soften. Ortega’s version displays his willingness to play with dishes. Instead of using the traditional tortillas, he uses housemade blue-corn totopos stuffed with refried beans. The totopos gives the dish an unusual but not off-putting thickness and texture. The masa rectangles are tossed in a mild and slightly tart tomatillo salsa and topped with a runny, sunny-side-up egg, an (almost unnoticeable) queso fresco, Mexican-style crema, fresh cilantro and a few thin slices of radish for add an eye-catching pop of color.

Despite so many components, the dish feels vibrant, and most of the individual flavors stand out enough to be noticed. While the dense texture of the filled-masa is a mouthful, potentially taking a moment to adjust to, URBE has successfully created a unique version of chilaquiles.

Other breakfast entrées include the familiar huevos rancheros and pambazo torta, a Mexican sandwich usually filled with potatoes and chorizo, although URBE’s version is stuffed with chorizo, avocado, refried black beans, queso fresco, pickled jalapeno, radish, salsa costeña and a sunny-side-up egg. The torta’s bread is dipped in a deep red, peppery sauce and then griddled.

Of course, no street food concept in Houston would be complete without breakfast tacos. URBE offers three. Each option is filled with eggs, potatoes, raja (strips of poblano chilies), onion and chihuahua cheese. The customer can choose just the egg and potato version or can add either pork carnitas or beef brisket.

At the service counter, nestled between the two registers, is a display case filled with a generous selection of classic Mexican desserts and pastries. Arguably the most famed staple of Mexican pastry cases, the concha is practically an exercise in seeing how many calories can fit into a single sweet bread roll by topping it with a crust formed from a combination of fat and sugar. URBE’s conchas are uncharacteristically light and airy, while the crust maintains a solid crunch.

Similarly, URBE’s chocolate chip cookies differ from what customers may expect from some panaderia-style cookies. In lieu of a dense, scone-like texture, the restaurant’s shortbread-based version crumbles with minimal effort. Instead of relying heavily on sweetness, the cookies allow buttery flavors to take the lead, interrupted only by bites of chocolate chip.

As should be expected from a restaurant by a James Beard Award-winning chef at a Galleria-area address, prices for pastries and desserts are higher than one would see at a traditional panaderia.

The lunch menu is expansive — much of it centered around masa and the many forms it takes in Mexican cuisine. Options include huarache, a sandal-shaped masa cake, topped with carnitas, rajas, refried beans, salsa verde, crema and queso fresco; and gorditas, a thick masa pocket stuffed with carnitas, chicharron, refried beans and salsa verde. Of course, there is a large selection of the most well known use of masa: tacos. Options include the usual favorites of al pastor, de birria and barbacoa. However, there are also several specialty tacos, such as tacos de pulpo al carbon with charred octopus, onion, cilantro, chilaca peppers and chipotle-tomatillo salsa. There are vegetarian options, too, such as tacos de camote las brazas, which is filled with roasted sweet potato, goat cheese, pumpkin seed, salsa macha and requesón cheese.

In addition, the lunch menu features three tortas: a pork torta ahogada, which, like the pambazo, is drenched in sauce; chicken milanesa and ground brisket burger served on a telera bun. Also, URBE’s massive chicharrón is likely to catch eyes on social media.

Customers can also buy in bulk from the para llevar menu, which features carnitas, trompo, birria, brisket and barbacoa sold by the pound, as well as rice, refried beans, salsa and guacamole by the pint.

On Saturday and Sunday, instead of lunch, URBE hosts brunch from 10 a.m. to 3 p.m. The menu combines a pared down selection from the lunch menu with a handful of items from the breakfast menu such as huevos rancheros and chilaquiles.

After a soft opening featuring just morning and afternoon service, URBE has recently added dinner from 5 to 9 p.m. Wednesday through Saturday. In contrast to the counter service at breakfast, brunch and lunch, URBE’s dinner is full service. The dinner menu offers many of the masa-based street foods found on the lunch menu, such as tlacoyo, a stuffed masa cake with chickpea purée, crema, queso fresco, salsa costeña and watercress. In addition, customers will find entrée-sized plates of barbacoa, birria, pollo ahumado (a smoked half chicken with salsa albañil and papas bravas) and carnitas, or slow-cooked pork, served with refried beans, Mexican rice, salsa albañil and tortillas.

The beverage program, which was developed by well-respected beverage director Sean Beck, emphasizes the restaurant’s Mexican influences, with tequila and mezcal receiving the most back bar space. There is also a small but well-thought-out selection of whiskeys, gins and rums, including a handful of Mexican rums. The cocktail list features two frozen drinks. One is the Roasted Mojito which features a central-Mexican spirit, charanda, which is similar to rum. It lends a sharp, grassy bite to the mint-infused cocktail, which is layered with roasted, muddled fruit.

The eatery offers four margaritas. The house margarita, or URBE Rita, replaces the orange flavor of a traditional recipe with a light passion fruit-agave mixture. The drink is well-balanced, with a quarter of the glass lined with a layer of bright citrus salt, giving customers the chance to alternate between subtle or bold flavors.

Beck is offering two wine-based cocktails: sangria and the less-common Kalimtxo, which combines red wine, Mexican Coke and a spice tincture. The beverage menu is rounded out with a handful of micheladas and several Mexican beers, with craft choices from the Monstruo De Agua and Colibre breweries, along with classics such as Modelo, Dos XX and Pacifico.

In addition, URBE is offering several wines, including a few from Mexican producers, such as Bruma Ochoa Blanco from Guadalupe, Mexico and Santo Thomas Tempranillo Blend from Baja, Mexico.

Did you get value from this article? We rely on our readers and sponsors to cover expenses each month, such as writer and social media fees, administrative costs, web development, software, online services, website hosting and more. Can you chip in just $5 a month to keep our coverage going? (Not tax deductible.) Thanks in advance for supporting local journalism! To become a sponsoring business and advertise on Houston Food Finder, email us. 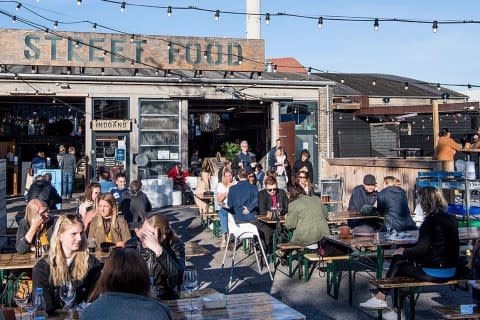