Urgent warning issued over popular yet ‘dangerous’ TikTok cooking trend: ‘Never try this at home unless you want it to burn down’

Fire safety officers have issued an urgent warning against the ‘incredibly dangerous’ TikTok trend that hundreds are taking part in every day.

‘Toaster steak’ is the latest viral trend taking over TikTok, and as the name suggests, people are cooking raw steak in their toasters.

The trend has become so popular than the London Fire Brigade released a statement reminding people to ‘only use electrical products for their designated use’, and urged people not to try the bizarre trend which could cause a house fire.

Scroll down for video 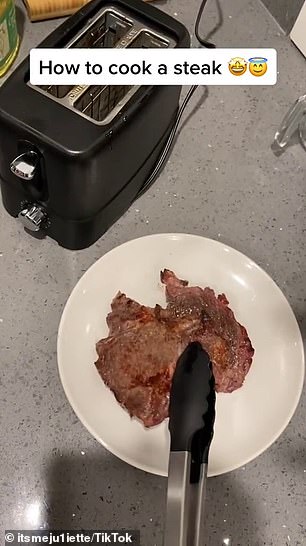 In a bizarre new trend, TikTokers have started to use their toaster to cook raw steaks. The ‘dangerous’ practice has been deemed an electrical fire hazard

‘What you having for dinner?’ the London Fire Brigade said when they shared their warning on Twitter.

The fire department advised against the fire hazard to raise awareness about the dangerous TikTok trend during Britain’s electrical safety week.

‘We’re reminding people to only use electrical products for their designated use. Don’t cook steaks in a toaster,’ the stark warning read.

The trend was kickstarted by American TikTok user Juliette, known as @itsmeju1iette on TikTok, who uploaded the video in late 2020.

‘Cooking steak for my boyfriend,’ the young women said she she shared her tutorial on ‘how to cook a steak.’

She put two completely raw rib-eye steaks in to her toaster, cooked them on high heat, then removed two seared and sizzling steaks which she covered in a brown steak sauce.

TikTok users were quick to jump on the trend, and the #toastersteak now has thousands of hits on the video sharing platform.

Some users have even brought the trend further and tried to cook chips to go with their steak in the toaster too.

People have also used their toasters to cook breaded fish fillets, and one brave TikTok user made an entire Philly cheese steak in the toaster.

Not everyone supports the trend. UK chef Gordon Ramsay slammed the girl for starting the trend, branding her an ‘idiot sandwich.’

‘What are you doing? Toast is for bread, and right now if I had two slices I’d stick them on your ears you idiot. And now you’re gonna cover it in sauce, really?’ the famous chef said.

Other social media users were similarly disgusted by the trend.

‘Don’t burn your house down for shit steak,’ one man said.

‘What the heck is wrong with you?’ another commented on the original TikTok video.

‘Your boyfriend is gonna break up with you,’ another joked.

The boundary breaking home chef has also attempted to use an iron to cook a cheeseburger, a straightener to cook bacon and eggs, a coffee maker to cook spaghetti and meatballs, a dryer to cook hotdogs, a car engine to cook a grilled cheese, a microwave for an entire roast turkey and a dishwasher to cook ramen.

The 2022 VegNews Guide to Thanksgiving Delivery

Tue Nov 22 , 2022
A love of food not does necessitate a love for cooking. If the idea of Thanksgiving dinner fills you with equal parts excitement and dread, Thanksgiving delivery may help assuage some of that anxiety around the act of making the meal.  If you have the means to outsource and you […] 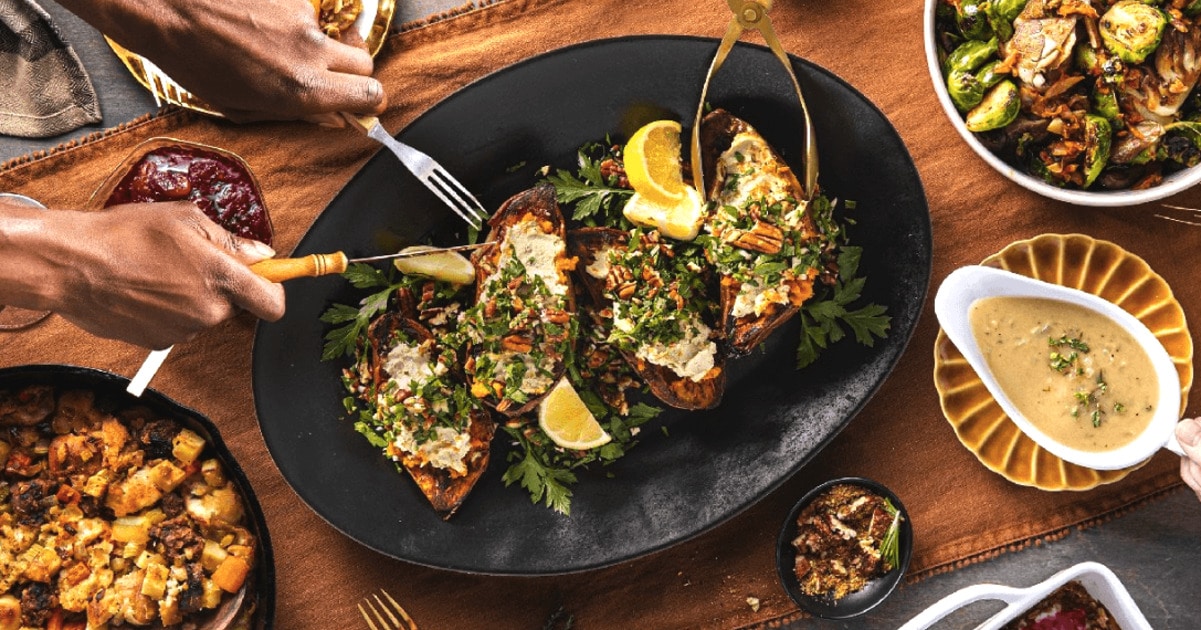