While central Portland gets all the hype for its popular vegan-friendly spots, outer East Portland is one of the most economically and racially diverse parts of the city — and that includes the food. From restaurants to delis, cafes to bakeries, East Portland boasts plenty of destination restaurants and local haunts. And despite being systemically underserved by city and state policymakers compared to the rest of the city, from poor infrastructure and lacking traffic safety measures to inadequate resources all around, the food scene continues to expand with many restaurants emerging even during the pandemic. Now, it is home to some of the city’s finest Chinese, Vietnamese, and Japanese food, some of the city’s best food carts in several notable pods, and a number of exciting international markets.

Yet the neighborhood isn’t celebrated for its vegan food in the same way. Along 82nd Avenue and beyond is a growing collection of plant-based restaurants and food carts with everything from artful sushi to loaded sandwiches.

So, when looking for exceptional vegan fare on the other side of 82nd, it’s best to crawl your way through the neighborhood. Make a full weekend out of it, tackling the vegan hub home to Food Fight Grocery and Collective Oregon Eateries pod in one day, and spending the second day hanging out farther south, near Cartlandia and Southeast Powell. In true Portland fashion, a fun way to tackle this crawl is via bike — Biketown has a number of e-bike stations you can rent around the neighborhood, between stops. Or, if the premise of biking a few miles after eating a pile of vegan mozzarella sticks seems unpleasant to you, hop in a car; we promise, you won’t spend too much time driving between stops. Take this guide as a sign to take a day trip out east.

To kick off your vegan food crawl — especially if you need a warm beverage in the morning to merely function — head over to Jet Black Coffee in the Gateway District. Jet Black collaborated with Water Avenue Coffee to create their own custom medium-dark blend with chocolatey notes. If coffee isn’t your jam, they’re also stocked with Portland teas.

Jet Black sources pastries from places like Shoofly Vegan Bakery, Sweetpea Baking Company, Bee’s Cakes, and Bowery Bagels — those feeling like something sweet should opt for a Shoofly cinnamon roll; otherwise, stick to an everything bagel with Vtopia cashew cheese.

After your morning coffee and snack, pop over to Jet Black’s neighbors at Food Fight, a vegan grocery store that’s been around for almost two decades. It’s usually well-stocked with cool vegan snacks made by local chefs, like Ice Queen paletas or Cultured Kindness cheese.

In the same lot directly next to Jet Black Coffee is the Rad Magic Subs cart. While Rad Magic Subs offers a solid selection of sandwiches stuffed with vegan deli slices, dairy-free cheese, and veggies, the move for your first time there should be the Rad Magic, filled with cucumbers, vegan cream cheese, balsamic-marinated mushrooms, red onions, tomatoes, and Portland’s own Mama Lil’s Peppers, all smooshed between a freshly baked French roll from the nearby An Xuyên Bakery. If you’re not quite hungry yet, take it with you for a picnic.

Before the next spot, you might want to get your appetite going again, so this would be the perfect time to stroll through Mt. Tabor Park, a 25-minute bike ride or a 12-minute drive west (remember to dress warm). Once you’re ready for more food, drive or bike for about 10 minutes to a new food cart pod serving Beyond Burgers and vegan sushi along 82nd Avenue.

Collective Oregon Eateries, or CORE, is a massive food hall and cart pod that opened in early 2021. It’s home to a number of interesting carts making lechon subs and Hainanese chicken, but vegans will also find plenty of cool options here.

The exceptionally hungry can head straight for Gnarlys, an all-vegan cart specializing in hypebeast burgers and fried snacks. The cart was previously home to the tropical-themed Sharks Cove; now, Gnarlys visitors hit up the cart for vegan mozz sticks, loaded fries, and burgers. Opt for the “sallyweaver” — stacked with Violife’s spicy provolone, faux bacon, and crispy onions, dripping with barbecue sauce, the flavors evoke summer barbecues. It’s particularly suited to a pint from the Breakside Brewery cart just a few feet away.

If back-to-back sandwiches and burgers seem daunting, directly across from Gnarlys is Mitate, serving Instagram-worthy sushi out of its lavender-painted truck. You’ll find a familiar but upgraded, veganized California roll, but you’re here to go bold, right? Branch out and order one of the mountain rolls, which use Portland-made Ota Tofu in addition to sauteed mushrooms, baked kale, and a black bean-garlic-truffle puree.

If it’s not too chilly out, grab a seat on the covered patio or head inside CORE’s modern indoor dining space — this is a good chance to take a quick bathroom break. From here, head east to Kelly Butte for more bucolic hikes, biking, or strolling until you’re ready for dinner.

Finish your day with a bang at Yuan Su Vegetarian on 112th and Southeast Powell. Make sure to show up with a large appetite, and maybe some hungry friends. Yuan Su Vegetarian has veganized a vast array of Chinese American dishes. The extensive menu (with large plates of food) is sectioned into the typical “pork,” “chicken,” “seafood,” “beef,” and, of course, tofu. It might fool your meat-eating friends, but trust us, it’s vegan.

If it’s your first time, order one of the combo plates, so you can try more than one dish. The No. 1 has a nice variety: sweet-and-sour chicken, beef and broccoli, and veggie ham fried rice, with a crispy spring roll. Or, you could convince your friends to share their plates with you, and yours with them.

Sleep in and start your crawl with lunch the next day in the bustling Jade District at Van Hanh. A Buddhist nun transformed this former temple into a vegan Vietnamese restaurant, serving meatless pho and egg rolls stuffed with mung beans and tofu. However, the Hue spicy noodle is the move here: thick, round rice noodles swirling among hunks of vegan beef and tofu in a rich, bright-red, spicy broth.

After lunch, spend some time shopping around the Jade District — pop by the behemoth Asian shopping center Fubonn to get some pantry staples or self-care standbys, or the Portland Nursery to stroll through the impressively large selection of plants.

When hunger strikes again during your Jade District shopping spree, grab some Mexican takeout from Taqueria Los Gorditos to bring to Lents Park for a picnic. Taqueria Los Gorditos has a full supplementary vegan menu with soy curl burritos and soyrizo tacos, but here, go for the vegan sopes — harder to find at other Mexican restaurants or vegan spots. Sopes are deep-fried corn masa, patted together by hand and fried, topped with beans, a choice of a vegan protein, vegan sour cream, lettuce, tomato, onion, and cilantro. Don’t forget to ask for a variety of hot sauces; Los Gorditos offers a few, depending on your spice tolerance.

When you’re ready to finish up your weekend of vegan snacking, leave Lents Park and head a few miles south — 15 minutes on a bike, 10 in a car — to another food cart pod, Cartlandia. Here, the pop-up-turned-cart Wicked Garden Alchemy churns out Beyond Burgers sandwiched in between cinnamon roll buns and vegan meatball grinders, all with a witchy vibe.

What stands out about this place is the menu of “potions, spells, and elixirs,” a fun selection of blended drinks with clever and eerie names like the Frankenstein, a mint-Oreo matcha. The must-try is the Hellraiser, a blended coffee drink swirled with caramel and Biscoff cookies, with a dollop of dairy-free whip on top. It’s a sweet finish to the weekend.

Fri Jan 21 , 2022
When Marcela Garces and Yuri Morejon to start with met, the point that brought them with each other most was a love of meals. Food items, and its skill to transport and teach the eater to places and cultures further than their have earth, has been a ongoing theme in […] 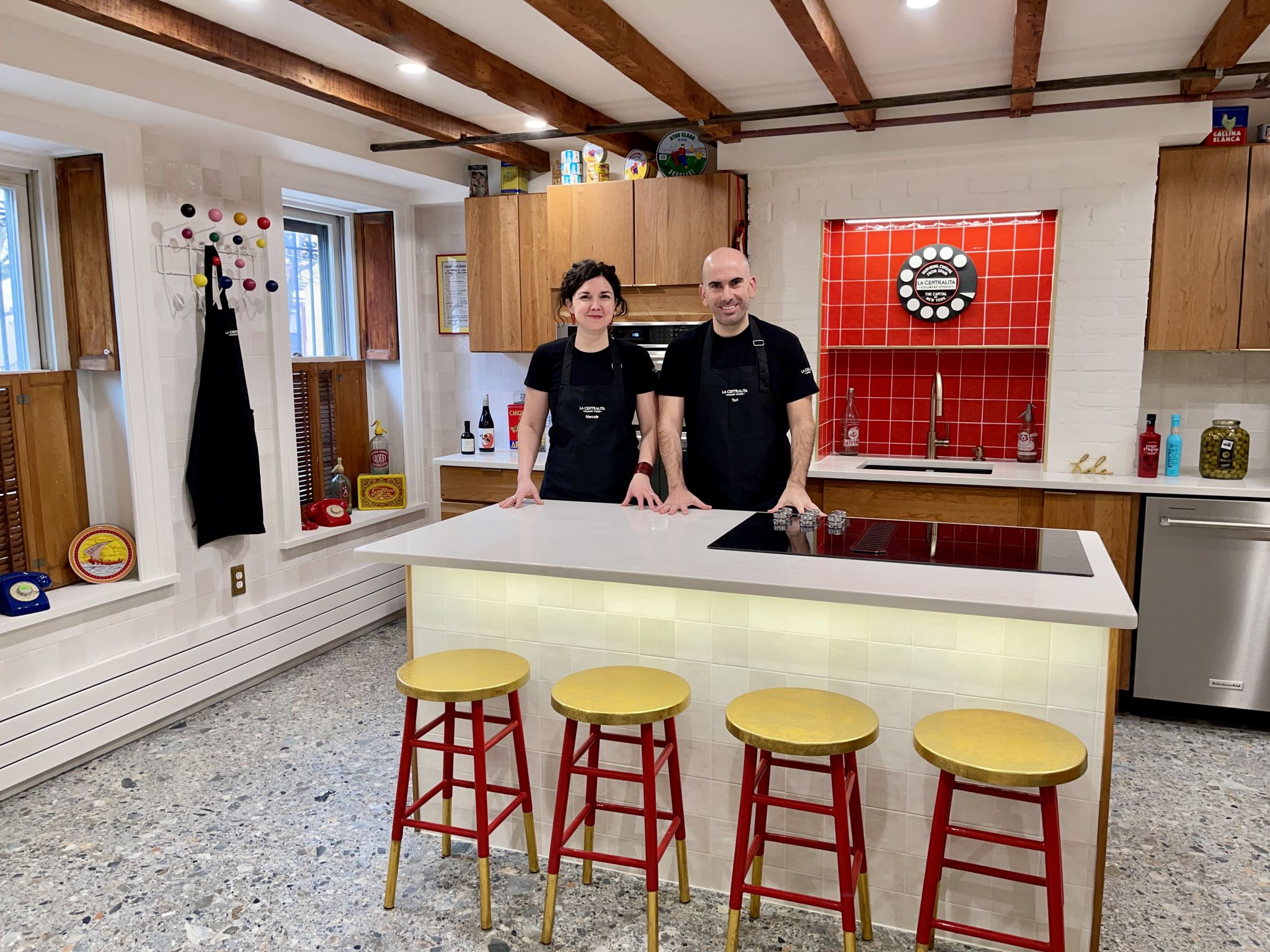