Almost everyone I know has stories about how they were inspired by their mom’s cooking. Some were inspired to cook because they wanted to replicate their mom’s cooking, while others were inspired to cook out of self-defense because their mom’s cooking was gruesome. Some avoided cooking altogether by adopting a life of takeout and frozen prepared meals. When and where I grew up, a very small minority of men regularly cooked, so almost none of my peers speak of their dad’s cooking. Today, we find more men in the kitchen at least some of the time, which has changed the dynamic somewhat. However, moms are still the primary meal preppers. According to a Bureau of Labor Statistics report from 2019, in U.S. households consisting of married/co-habitating parents and one or more children, 80 percent of mothers said they are the household member who usually prepares the meal.

In so much of 1950s and early 60s America, it wasn’t considered manly for a man to cook at home except for special occasions. There was the outdoor grilling exception, of course, which could be summed up by our most primitive instincts: fire good, man cook! It was also a time when far fewer women were in the workforce, so roles were more clearly defined. In my household, if my dad cooked it was on an emergency basis only — he didn’t even grill — and happened once every 10 years or so. It took events such as my nine-year-younger brother being born for him to put a pan on the stove. My few memories of him cooking are not particularly warm and fuzzy ones.

Luckily, my mom was a very good cook, and when she went back to work teaching home economics (when it was called that) in my senior year of high school, I began to find my way around the kitchen if I wanted to eat some nights, as she would be busy correcting papers, writing lesson plans, and working on budgets. There were also evenings she had to attend events. Through my mother’s work as a teacher, I gained a full appreciation of how demanding that job is. I learned teaching does not start and end with the school day, and often extends until bedtime, only to start all over the next day.

After I graduated from high school and we moved to Cape Cod, my mom took over the Home Economics Department at Nauset Regional High School in Eastham. While there, she became a pioneer of sorts in what is now often known as family and consumer sciences in schools. One of the things she did was to institute a chef’s’ class, which was populated almost entirely by boys. She knew if she called it a chefs’ class, she could lure the boys in and protect their particularly fragile developing male egos from taunting at a time when cooking classes were only for girls.

Male egos can be fragile at any age, but a still developing one can be very fragile, indeed. My poor mother, who was an only child, had to learn of the complexities of the developing male ego under fire by initiation from her three very active, borderline barbarian sons. I like to characterize her as the referee, as we would battle each other with severe intent, but all 5’2″ of her was usually reduced to pleading as we swung at each other over her head.

My mom’s cooking evolved as the ’60s became the ’70s and America began to take a greater interest in foods of the world through an increase in travel and as cooking shows began appearing on television. I still have my mom’s copy of “Mastering the Art of French Cooking,” a book which eventually led to Julia Child’s television career. I remember her collecting the “Time–Life Foods of The World” set of cookbooks during this time, most of which have been lost through a multitude of moves.

Being on Cape Cod at the time, I distinctly remember her roasting whole striped bass with tomatoes and olives for dinner parties. It was an impressive presentation and delicious. However, as delicious as that was, my usual request when I came home from college in the ’70s was her very ’60s version of chicken with biscuits and gravy. Her version was to poach bone-in chicken breasts in that ubiquitous recipe base, Campbell’s Cream of Chicken Soup. This was served with biscuits baked from a refrigerated tube, half of which were put in the “gravy” before she brought it to the table. It was such classic comfort food, I used to sometimes recite “chicken and biscuits and gravy” as a mantra going to sleep while at college.

One of the recipes she used to make, which I hadn’t thought of for years, came to mind recently while shucking peak-of-the-season corn. She used to make another comfort food, cornbread griddle cakes with whole kernel corn in the batter. I think it was a preparation from her youth growing up in upstate New York. I would drench those cornbread cakes in butter and maple syrup and shovel those heavenly, buttery-sweet, golden bites into my mouth and love the pop of those milky corn kernels as I bit down.

I usually buy more corn than I’ll use on any given night, as leftover corn stripped off the cob is always good in salads, stir fries, almost anything Mexican, and so many other recipes. It allows me to extend the corn season over many more nights. Without going through the entire days-long, obsessive process I usually go through thinking of how to turn an idea into a meal, I’ll cut to the chase. I decided I’d get those cornbread cakes crisper by making them into waffles. I next decided that shrimp glazed with bourbon and maple syrup would undoubtedly be good served over those waffles. I thought of peaches as they’re in season now, too, but I thought that peaches and shrimp over cornbread waffles made with corn off the cob would be too much. A simple salad made with peaches would be a nice side, though.

So, here it is, Mom’s cooking evolved: bourbon and maple glazed shrimp (mint julep glazed shrimp, with the addition of a bit of mint, if you will) over crispy, corny cornbread waffles with a peach salad side.

This recipe is a bit like having breakfast for dinner, but it could be a special breakfast or a pretty spectacular brunch, too. The waffles would be excellent with just butter and maple syrup, too. No matter what, we really enjoyed it and I was happy with how it eventually turned out after refining the waffle recipe, which began as a disaster. The peach salad was a revelation and super easy.

Method
Preheat the oven to 225 degrees to warm the waffles after cooking. In a medium bowl, whisk together the buttermilk, eggs, and cooled melted butter. In a larger bowl, whisk together the dry ingredients. Make a well in the middle of the mixed dry ingredients. Pour the buttermilk mixture and the corn into the well and mix together until completely mixed, but without overmixing. Allow the batter to sit for at least 10 minutes to allow the cornmeal to soften before cooking the waffles. Cook until golden brown. After cooking all the waffles, trim them and place them directly on the oven rack or a cooling rack over a sheet pan so the waffles maintain their crispness while preparing the shrimp. Make sure to warm the waffles completely.

Peach, Basil, and Red Onion Salad
This is best served at room temperature, as a side.

Method
About an hour or so before serving, toss the red onion slices with the rice vinegar in a bowl to marinate and soften. Place ½ of a sliced peach on each plate and push down on each so they’re shingled. Scatter the marinated onions on top of the peach halves and divide the accumulated juice from the marination over the peaches. Sprinkle with the torn fresh basil leaves and serve.

What to Cook This Week

Tue Sep 14 , 2021
Good morning. I like the looks of Melissa Clark’s new recipe for roasted lemony fish with crispy caper brown butter and nori (above) and might make it tonight if I can find good fish at the market. But I’ll tell you this about these mid-September days of high pressure and […] 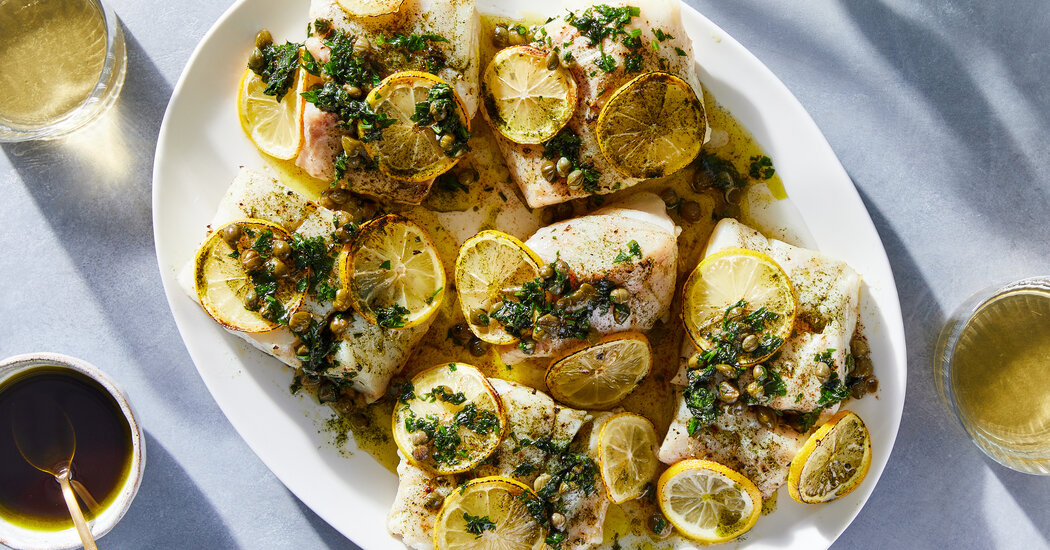