Mark Mylod’s The Menu is set almost entirely within the sleek modernist walls of Hawthorne, an ultra-exclusive restaurant located on a small island accessible only by boat. There, the wealthy elite drop $1,250 a head to consume the culinary works of art produced by world-renowned American chef Julian Slowik (Ralph Fiennes). Only the menu that Slowik has in store for the film’s group of patrons—which includes the obsessive foodie Tyler (Nicholas Hoult) and his apathetic plus-one Margot (Anya Taylor-Joy)—isn’t just a multi-course experience, but a series of violent punishments against society’s upper crust.

The Menu is a horror satire that draws plenty of fodder from the world of haute cuisine. Most notably, it’s obsessed with the worship of celebrity chefs and the inherent classism of rich patrons feasting on overpriced dishes laboriously prepared by underpaid staff—food which, as Slowik points out with malicious irony, will eventually turn to shit. But the ostensible critique of the culinary appetites of the one percent becomes increasingly hollow over each successive course. As the torture of Slowik’s customers grows more elaborate, both psychologically and physically, the social issues that the script circles and takes aim at come to feel like nothing more than pretexts for mounting artfully staged but redundant set pieces.

It doesn’t help that The Menu never sees Slowik’s targets as anything other than easy representations of high-society types. Among them are a smarmy movie star (John Leguizamo), a pretentious food critic (Janet McTeer), and a trio of obnoxious business bros (Rob Yang, Mark St. Cyr, and Arturo Castro) who, early in the dinner, make a toast to money. To be fair, that’s by design, as Hawthorne’s guests have been targeted because of their almost hard-wired disdainful attitudes. “You will eat less than you desire and more than you deserve,” says Hawthorne’s scarily tranquil hostess Elsa (Hong Chau) at one point, knowing that the patrons will endure much violence if it means that they’ll at least get to taste more of Slowik’s creations.

That gallows humor, born out of satire, is effective in spots, especially when laced into the horror set pieces, most memorably during an early course called “The Mess,” where a shocking act of self-inflicted violence from one of Hawthorne’s staff causes some of the sycophantic customers, assuming the moment was staged, to marvel at the experience that Slowik has cultivated for them. And all the while, the actors do their best to breathe life into their stock characters. McTeer, for one, plays critic Lillian Bloom with a reserved, calming demeanor that creates an amusing juxtaposition with the character’s abrasively snotty quips.

But for as potent as the film’s shocks can be in the moment, it’s difficult to shake off that the screenplay by Seith Reiss and Willy Tracy, both graduates of The Onion school of satire, lacks for the breadth of variety that’s necessary to make more than just a restaurant’s tasting menu take flight. The film simply doesn’t deliver on its promising premise, and its clumsiness is perfectly, if unintentionally, represented by the moment in which Slowik suggests to Tyler that he whip up something to eat and the flustered fanboy exposes his inexperience in the kitchen by haphazardly throwing a hodgepodge of food into a skillet and producing an undercooked meal. The Menu serves harrowing haute cuisine, but as the film increasingly spins its wheels toward a half-hearted conclusion, it also shows that coherence isn’t its strong suit.

Mon Dec 5 , 2022
Arepas have been eaten in South America since pre-Columbian times. For Mariana Restrepo, they’re a reminder of all the hands that have fed and shaped her. Photo by Isabel Byfield / Tastyaz.com My family doesn’t have any heirloom recipes passed down from generation to generation. I did not learn how […] 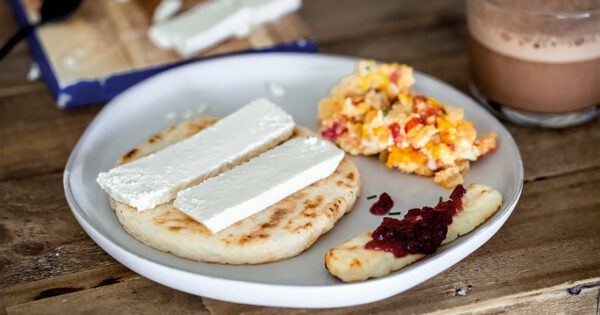